Okay, I want to start by thanking Eric for a nice, beefy entry yesterday, because I am so seriously wiped that I don’t want to blog at all and would love nothing more than to shut down my laptop this very second and go to bed. So, at least I can rest easier knowing you’ve had TIFF stuff to read and that my briefer-than-usual post might be enough.

[As an aside, I would like it noted on the public record that I love Eric and Dan. Truly, madly and deeply. And I will be very, very sad when they head home on Wednesday.] 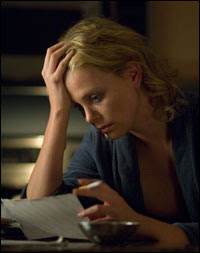 I began the day with The Burning Plain (7/8), a surprisingly effective multi-storyline drama from Guillermo Arriaga, who penned other multi-storyline dramas (of varying degrees of efficacy) like Babel and 21 Grams. Jumping back and forth between several seemingly unrelated characters and the various traumas in their lives, and featuring a cast of largely unknown actors, the film delivers some nice work from A-lister Charlize Theron... but man, oh man, what’s with Kim Basinger? As lonely housewife Gina, who enters into an affair, she does not stop shaking for the entire time she’s onscreen! She is constantly trembling and quivering and jittery, and that seems to be her new signature move – conveying everything from fear to anxiety to stress to sadness via non-stop tremors. Hers was easily the weakest link in this otherwise strong chain.

Now, to backtrack a bit, my one must-see flick at TIFF 2008 was Wendy and Lucy. 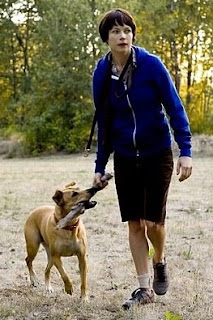 I tried to snag a ticket every day (and in the initial ticket lottery) without success and feared my quest would be a failure... until this morning, when I went to the TIFF box office at TLS at 8am (!) and once again requested that film for later in the day. As if by magic, it was available. OMG. I finally did it. Four days of incessant checking finally paid off! It was my film-fest Everest, and I managed to ascend it.

Problem is, Wendy and Lucy (5/8), which had received huge amounts of positive buzz and critical acclaim turned out to be, in my opinion, just okay. A true indie film in every gritty, low-budget sense of the word – save for its name lead, Michelle Williams – the bare-bones story centers on a troubled young woman (Williams) en route to Alaska, who stops in a small town, gets arrested for shoplifting and loses her dog (the titular Lucy). That’s it. I understand it’s a character study, but for me that character left me feeling a little disappointed. Okay, a lot disappointed. The movie was fine, but I had hoped that it would wow me to such a degree that it would be my fave of the fest. Sadly, that won’t be the case.

Speaking of movies that won’t be my festival fave, can we talk for a moment about Cooper’s Camera? Omigoditwassopainful. So much potential and yet so terrible. I can’t even review it or rate it properly because, as Eric points out, I left a half-hour in. Between the late start time, the unfunny script and the consistently shaky hand-held camerawork (that started giving me a serious headache) I was ready to call it a day and head home. I had no idea whether Eric and Dan were enjoying it, but I wasn’t going to stick around to find out. Turns out, I missed absolutely nothing and I’m supremely relieved that I high-tailed out when I did. 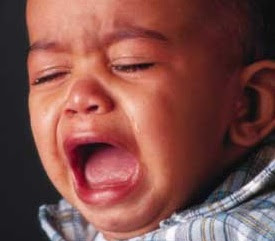 Possibly even more tragic than Cooper’s Camera, though, was Moviepie’s Eric and the Kingdom of the Lost Smoothie, which screened at the Dundas subway station earlier in the day. It was heartbreaking. Young Eric had just procured a fantastic Vitapom smoothie from Jugo Juice and was savouring its deliciousness as we approached the turnstiles to head back to the hotel. Suddenly, a subway pulled into the station, we all scrambled to get out our transit passes in time to get through the turnstiles and onto the subway, and – in the frenzy – Eric lost his grip on the cup and his spectacular smoothie crashed in a most spectacular explosion-of-fruity-goodness way all over the floor. To say that he was distraught over the loss would be an understatement. I have never seen a sadder clown in all my life, and I hoped that something... anything... would cheer him up.

Unfortunately, Cooper’s Camera followed thereafter so, you know, not so much.

Line Buzz: Still MORE people complaining about ticketing! There were two women chatting in one of the theaters before a screening, and one said, “I have never had this much trouble trying to exchange my tickets!” Sing on, sister. Some good buzz for 35 Rhums and Once Upon a Time in Rio.