I like to believe that the universe tries its best to maintain balance at all times, so that whenever something crappy happens somewhere, something amazing might happen somewhere else. That’s kind of what today’s TIFFing was like.

If you recall, yesterday sucked hard in my TIFF world, so it was with a mixture of dread and optimism that I began anew this morning. I’ve had insomnia for the past several days so, despite desperately needing sleep, I was wide awake by 7am. I figured I’d take my lemons and make lemonade, so I got up, got dressed and headed down to the box office at TLS to see if I could score any tickets to anything today, since all I had lined up was an evening screening.

Things got off to a good start – a subway arrived right away and, when I arrived at TLS, the box office was nearly empty, allowing me to be served immediately. (Note: Grabby Glenda was on duty this morning, but I breezed right past her and never made eye contact... though I did notice my shoulders tense.) Despite going in with five picks (including alternates), I only wound up with one ticket. But I told myself that was better than nothing at all, and trekked back home for a couple of hours of breakfast, rest and email. 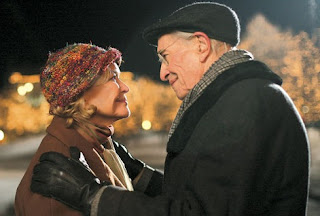 Even though it wasn’t my first (or even second) choice, I was thoroughly delighted by my first screening of the day – in part because the film was great, and in part because my film-going experience was great, as well. The movie was Lovely, Still (7/8), a really sweet and very poignant (read: yes, Vickie cried) love story about a lonely grocery store clerk (Martin Landau) and the romance he strikes up with the new neighbor (Ellen Burstyn) across the street. Written and directed by a young fellow named Nik Fackler – who’s all of 24 years old! – the film changes tone a few times, with remarkable results... even though I kind of figured out what was happening about halfway through. The performances from the two leads were strong, and the post-film Q&A – which featured both of them, plus Fackler and co-star Adam Scott – was fantastic. Spirited, strangely moving (hearing Fackler’s explanation as to why he wrote the story in the first place actually put a lump in my throat) and really funny.

Also funny: after the film, I met up with Eric and Dan in the food court below the AMC. As we stood there chatting, I looked up to see Ellen Burstyn descending the escalator and being led through the food court. It was simultaneously amazing and sad. I mean, was there no more dignified way for her to leave the venue than having her shuttled past Thai Express and Subway? She’s won an Oscar!

And while we’re on the subject of the AMC, guess what? You don’t ever need to line up for ANY screenings there! Know why? Because there is ZERO security between the street-level entrance and the entrance to the actual cinema in which you’ll see your film! Isn’t that awesome?!

No. No, it’s not. This free-for-all approach to ushering ticket holders into the venue is a thousand times less secure and more prone to line cutting than any other theater in TIFF’s history. I know this because today was my first actual screening there, and I was maybe ninth or tenth in line. As the line was let in and we began our three-escalator ascent through the shopping concourse, we just merged with ALLLLL the other people ascending the escalators – the folks heading up to buy tickets at the box office, the tourists going to the merch room to pick up T-shirts, the people on their way to the food court for lunch or to Future Shop for a new TV... or the ones with tickets to our screening who were just JOINING THE MASSES AND CUTTING IN LINE. Not just one or two, dozens! When I got to my theater (remember, I was near the front of the outdoor line-up), there were easily 30 or so people already inside, and a slew of strangers (who hadn’t been in line in front me) suddenly materialized between the entrance to the building and the entrance to cinema 2.

And, really, kudos to the queue jumpers for the foresight. Well done. Why bother standing outside in the line, when you can just loiter in the lobby (or in the food court), keep an eye on traffic and just join your fellow ticket holders when they’re let in? It’s so much easier and takes so much less time and effort than waiting outside for an hour, and chances are no one will be able to thwart you because you’ll be alongside a whole bunch of your comrades doing the exact same thing! Even line policers like me are powerless to single out the cutters because there are just so many.

Yet another big strike against the AMC, IMO. 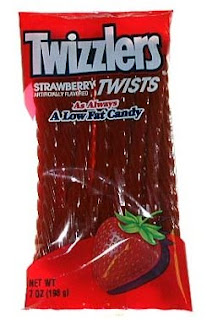 BUT... I should add that I had a delightful time waiting for Lovely, Still to begin because I struck up a nice chat with a group of women who took the seats next to mine. We talked about what we’d seen so far, what we hoped our impending screening would be... and then the nice lady sitting next to me complimented me on my shoes and actually offered me some of her just-purchased Twizzlers! Multiple times! It was such a nice gesture, something so small and seemingly insignificant and yet so diametrically opposed to the asshattiness of Grabby Glenda. It, and the movie, warmed my heart.

Eric, Dan and I then headed to Yorkville for (we hoped) random celebrity sightings, but saw nary a celeb. We did, however, pass the two loud, obnoxious eTalk “lounges” on Yorkville Ave., outside of which were scads of young film fans hoping to see, I dunno, Zac Efron I think? Some other teenybopper? Based on some of the serious spazzing out we witnessed, I think of few of them might have been successful. So, we wound up shooting interview footage instead. 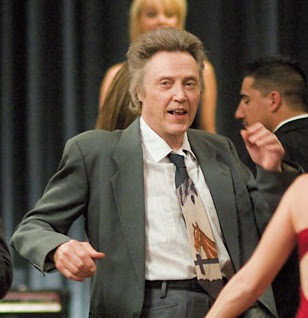 My second screening was okay, but not great. I should tell you that I love Amanda Peet, and will happily see anything she’s in, so (again, not my first or even second choice for this timeslot) I picked up a ticket for $5 a Day (5/8), from director Nigel Cole (Calendar Girls). It centers on a con artist (Christopher Walken), who’s dying and who embarks on a cross-country road trip with his estranged son (Alessandro Nivola) in a bid to rebuild their long-flawed relationship. I can’t put my finger on what was wrong with this movie, but it just didn’t resonate with me at all. Something was missing. It felt like I’d seen this movie before, more than once, and it didn’t have enough Peet. It was, in a word, meh. And, even though it was the film's world premiere, only the director showed and gave a rather long-winded introduction.

And that was it for today. If all goes as planned, I’ll have three films tomorrow. I made the mistake – during one of my “let’s see if I can exchange some vouchers” expeditions – of not ensuring I’d have enough time between two of my films, so I already know that there’s no way I’ll make the one I currently have slated for noon. Fingers crossed I can get a same-day ticket for something else!

Celebrity Sightings: Ellen Burstyn, Martin Landau, Adam Scott.... and Michael J. Fox, in town to pick up his star on Canada’s Walk of Fame. (I walked past the outdoor ceremony on my way to the Scotiabank tonight.)

Line Buzz: Okay, for real, people are mad this year. Today I was in line and heard a guy behind me actually say that he was DISGUSTED at how TIFF is devolving, and he was on a tear about the AMC, in particular. Some negative buzz on Birdsong and some "I agree with you" re: 33 Scenes From Life.