I mean that title literally and figuratively, if you know what I mean, although I don’t mean any offense towards Mississaugans just because our first dud of the festival is set there. But that comes later. 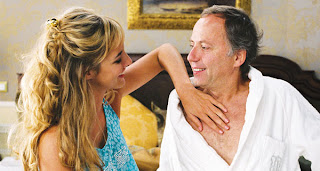 First, Dan and I caught a morning movie -- by the way, I am no longer using quotes around the word morning because apparently the Scotiabank Theatre food court doesn’t think people eat lunch until 3 PM, when it finally opened -- called La Fille de Monaco (5/8) (The Girl from Monaco). It was a charming, sexy French comedy with a slight thriller twist near the end, which was intriguing but disappointingly not fully explored.

Bertrand (Fabrice Luchini) is a stuffy, aging lawyer in Monaco for a highly-publicized case. Against his wishes, Bertrand’s client has hired a thuggish bodyguard to accompany him at all times and even sleep in his hotel room. And that’s when the titular girl shows up: this is Audrey (Louise Bourgoin), and she is a sexy local weather girl who is terrible at her job but wonderful at intoxicating Bertrand with her lack of inhibition. Bertrand’s bodyguard warns him against this girl, but he is smitten... and his mind is firmly off his big case.

This was exactly the movie I was expecting when I chose it -- it was certainly not too deep, but it kept me entertained for the entire hour and a half, the locations were gorgeous, and who doesn’t enjoy listening to people speak French? And it is starting to look like Dan sleeps through one film per festival, so better it was this one than the one where Jean-Claude Van Damme is a great actor.

Interestingly, the actress playing the title role (in attendance for the Q&A, although I’m pretty sure she spoke zero English) was an actual weather girl with no film experience when the director took a chance and gave her the starring role in this movie. Bourgoin was fabulous in the role and obviously has an acting career ahead of her, but Vickie saw her in the lobby and reported that the instant Bourgoin turned away from fawning festivalgoers, her luminous smile slid right into bitchface.

Maybe she was just jet-lagged.

In the afternoon, we ate an early dinner with Vickie, her sister Trixie, and her friend Valerie. They were all delightful and I loved every minute, especially when the topic of America’s Next Top Model came up and Valerie volunteered, “I don’t know that much about Tyra Banks, but sometimes she does things that make me embarrassed for her.” I laughed so hard I almost snorted chicken pot pie out of my nose. But you know what? I would have looked fierce doing it. And that is the difference between just a pretty girl and a model. 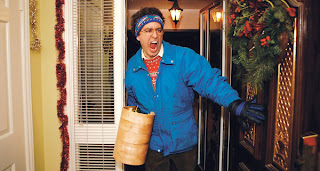 Unfortunately, it was just about time to come down from our TIFF ’08 high, and we should have known because our next film, Cooper's Camera (2/8), was the first screening we shared with Vickie... just like last year’s Nothing Is Private... AND it was shown in the same theater where we saw Nothing Is Private. I guess we can’t say the universe didn’t warn us, but on the other hand, we had a lot to look forward to: this “1985 VHS home video”-style comedy stars Jason Jones, Samantha Bee, and Dave Foley, all of whom were in the audience for the film’s WORLD PREMIERE.

The film was just awful. The TIFF programmer who introduced Coopers’ Camera enthusiastically announced that after 2 minutes, they KNEW they had to show this magnificently crafted comedy that would totally change our lives for the hilarious. The filmmakers would probably not care to know what I was thinking after 2 minutes of Coopers’ Camera.

The plot centered around the titular Cooper family, who get a fancy new VHS camera on Christmas Day (IN 1985! LOOK AT THE HILARIOUSLY BAD HAIRSTYLES! LOOK AT ME NOT LAUGHING!) and film throughout the day as their family falls apart and pulls back together on a thoroughly unpleasant journey of human ugliness. But, you know, it’s hilarious because the house is full of ‘80s stuff and there’s a lot of pee and poop and sex jokes.

And -- this is something that bothered me throughout the movie -- it didn’t remotely resemble VHS. It was obviously shot in HD digital video with some filter applied to make it look like VHS, but it didn’t work at all. So it was impossible to ever feel like this was taking place in the past, on top of the fact that it played like a tedious SNL sketch.

There was probably a collective 8 minutes of funny in all of Coopers’ Camera -- and to be fair, the parts that made me laugh REALLY made me laugh, such as the gift exchange sequence where grandma receives wrapped produce -- but this should never have become a movie. I still love Jones and Bee on The Daily Show, and I’ll never stay mad at Dave Foley for long, but overall this was an awfully depressing affair.